The Confluence of Two Paths: Ismaili Gnosis and Jnana Yoga – The Start of Our Story5 min read

My best friend described finding “the one” like a game of Musical Chairs. She would say, “Sabrina, when the music stops, you marry the one you’re with.” But I think it’s more like a game of Go Fish; you keep fishing until you find your match.

The last time I went fishing, I found the mirror of my soul. The joy I felt when I first met Khalil was the same joy I had felt when I first read the Bhagavad Gita. Reflecting on that emotion, my heart had attuned itself to the vibration of coincidence – the intersection of one’s free will and his destiny. Is it a coincidence that I found the Bhagavad Gita when I was searching for essential truth and Khalil when I was searching for existential truth?

Khalil and I, individually, had spent much of our adolescence in search of the meaning of existence, a guide to the Truth, and a spiritual path towards the Absolute. We each had internalized a story that resonated with the deepest parts of our souls. He openly shared his with others, inviting them to join him in knowing reality. I solemnly suppressed mine amidst others, diverting them from seeing my inner reality.

We started at opposite ends in our first conversation, him with the Holy Quran and me with the Bhagavad Gita, trying to convince each other of the best source of Eternal Truth.

“I believe in the Living Imam, but I can’t relate to the Quran at all.” I declared. The fact that I had attempted to read the Quran, held a strong opinion, and had found an alternative solution gripped Khalil. What had him hooked is when I said, “I feel closest to God when I read.”

Khalil quickly rebutted, “But the Quran has an esoteric meaning and you’re not supposed to read it on your own as a stand-alone text.”

“But why can’t it be like the Gita – a timeless masterpiece that’s easy to read and understand?” I argued.

“The Quran is a book of symbols that have to be decoded. But wait a minute, how do you believe in the Living Imam without consulting the Quran?” Khalil seemed puzzled.

“That’s simple; the Gita talks about an ever-living guide. Shri Krishna did say, ‘I will come and mingle as a man among men…and those who are able to pierce my disguise will know me in my essence.’ Now, who do you think that is?!'” Khalil gently smiled, knowing he was in the company of a fellow believer.

But our paths are rooted in very different contexts. Khalil travels the path of Ismaili Gnosis, where the Quran is his scripture and Imam ‘Ali is his first master (see post: The Eternal Imam). I travel the path of Jnana Yoga where the Gita is my scripture and Shri Krishna is my first master (see earlier post: From Shri Krishna to Shah Karim – My Journey Home). However, like tributaries that flow into a single river, both paths lead to the same destination. The confluence of our two paths has brought us together before the Living Imam – Shah Karim al-Husayni. 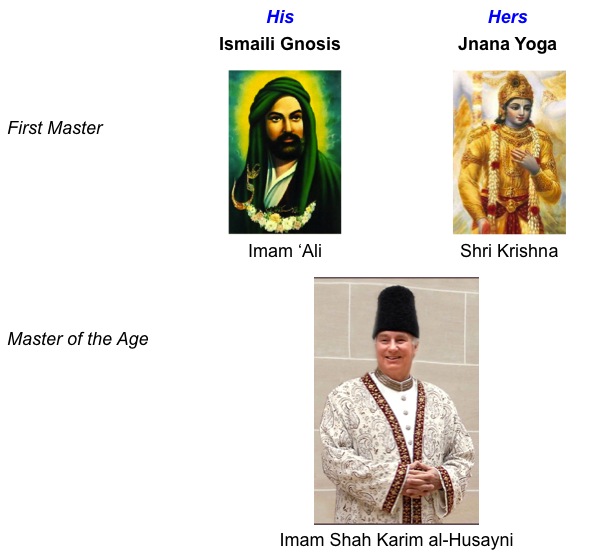 I then asked Khalil what the purpose of his undergraduate studies in mathematics was since he was so passionate about metaphysics and theology. His explanation of the esoteric symbolism of numbers completely swept me off my feet. Was he a mathematician or a magician? I didn’t know. But he was clearly not going to let our conversation center on the mundane, physical world.

As Khalil transitioned into Nasir Khusraw’s notion of numerology and how it symbolizes the levels of Being, my mind summarized our common metaphysical worldview in a table (see below). He explained that God, or “Divine Essence” (what I call “Absolute Reality”) is represented by the number 0, that which has no second. It is boundless, infinite, incomprehensible and indescribable. By way of involution, from the “Divine Essence” came the first cause, the “Universal Intellect” (“Universal Mind” in Jnana Yoga) – represented by the number 1 – and subsequently, the second cause, “Universal Soul” (“Universal Energy”) – represented by the number 2. Then followed the creation of the cosmos and the unfolding of individual consciousness. 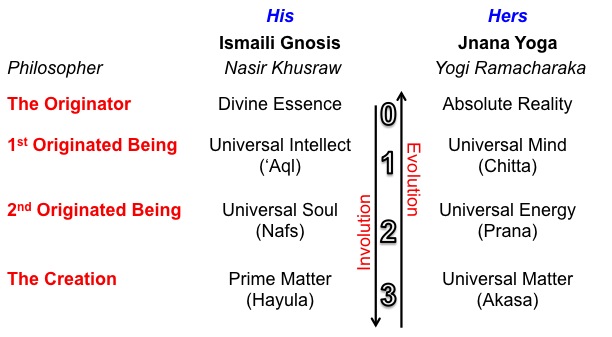 Khalil’s words were mesmerizing, as if he had secretly stolen them from the hidden depths of my soul. His explanation of Ismaili theology confirmed my Yogic understanding of how the world came into being. My inner self was leaping with joy – finally, someone found the key to my heart through my mind. Could this really be happening? How does he know me so well? How is he aware of the beliefs I’ve never shared with anyone?

Khalil matched my inner identity as an introvert, a thinker, a seeker, and a sincere student of the Spirit. He held the same card I never showed anyone else. The game of Go Fish has come to an end for me. And now we travel our spiritual paths together, inspired by Shri Krishna’s words:

With Me ever in mind, and with Me ever occupying the sacred chamber of their hearts, they are filled with a secret joy and calm content. And from within the minds and hearts of such, I constantly illuminate and inspire them, so that they are a constant source of inspiration to each other, and their inward lights combine to shine forth to the world of darkness and ignorance. – Bhagavad Gita, Part X

Just as our paths converge before universal Truth, our respective masters – Imam ‘Ali and Shri Krishna – are the mirror-like Manifestations of the same Light (nur) or Reality (haqiqah) as shown below: