My training to be a “good wife” started at the age of 8.

“I shouldn’t have to tell you to take out the garbage. If you see that it’s full, you should know that it needs to be taken out. What will you do when you get married?”

Marriage was not even on my mind, but I silently took out the trash and then resumed my math homework while seated at the kitchen table. My back was turned towards the kitchen stove where my mother was preparing dinner.

Only a few moments later, the silence was interrupted again by the sound of my mother opening the garbage can. “Don’t you know that you need to replace the garbage bag when you take out the trash? What’s the point of doing half the task? When will you learn these basic things? What will your future in-laws say if you don’t even know this much?”

What she was really worried about is what my future in-laws would think about the way my mother had trained me around the house.

I hesitantly turned my head over my shoulder to silently communicate that I had indeed heard her and was ashamed of my negligence.

“Now what are you looking at me for? Get up and go make yourself useful.”

This was my mother’s tough love for me. I always wondered if there was another way she could have taught me all of these things.

“Can’t you just ask me nicely?” I screamed through my tears one time.

You are incomplete until you get married.

The more tough love my mother applied, the weaker I became. I now see that my mother was trying to make me strong in her own way, so that I can survive in this cold, patriarchal world. And instead of appreciating that, I yearned for soft, gentle, kind words of validation from her – or rather – from anyone. I was waiting for someone to come along and validate my feelings, confusion, hardships, and perseverance.

I learned to think that I am worthless unless someone else finds me worthy of love. Single at the age of 26, I felt ashamed. I had failed to secure a relationship and validate my mother’s lifework of child-rearing, that of her mother, and her mother’s mother and so on.

Girls can’t carry on the family’s name, but they can surely damage it. In the South Asian culture, it is the mother’s responsibility to guard the family name from her daughter’s “wrong” actions. Daughters are seen as pariahs, entrusted upon their birth family, but officially belonging to their future in-laws.

A daughter’s wedding is often a grander celebration than her birth. The birth family dutifully hands the daughter over to her in-laws (as if she was cattle) along with the power to approve or disapprove of the way she has been raised. The bride’s family also showers the groom’s family with gifts in hopes that they will kindly look after the bride (or go easy on her).

In essence, this is how the Mother Wound is inflicted from one generation on to the next, particularly in South Asian families. These traditions continue to imprison South Asian women with feelings of shame, inferiority, and inadequacy.

I felt dishonored by the traditions my family adhered to. I demanded to know why the gifts were necessary, why there were no rules for the groom’s family, and why my family was so eager to give me away. I didn’t need my in-laws to look after me and I wanted my parents to acknowledge that. My parents insisted that they were following traditions because everyone expected them to and they wanted to do all they could to ensure that my marriage started off well.

I asked the painful questions: Am I a burden on you? Do you regret having me as your child? Do you wish I didn’t exist? In return, I received more painful messages: A man doesn’t need a woman; a woman needs a man. You need your husband because you’re a woman and he’s a man. Remember what we’ve taught you. Be a good wife. Don’t let us down. Love your in-laws more than you love your parents. Now they are your family and you belong to them.

We, as individuals and as a society, are all operating within a broken system on every level.

We raise our sons to be ultra-independent, self-centered, and assertive. Boys learn to suppress their feelings, hold back their tears, avoid emotional intimacy, and lash out against being controlled, manipulated, or rejected. Boys learn to fiercely believe in themselves.

Girls learn to be the exact opposite: approval-seeking, sensitive, self-sacrificing, and apologetic. As a child, I learned to be agreeable rather than confident. I learned how to give endlessly, support, and celebrate others in order to make a place for myself. This was the first sign of a broken system on an individual level.

Instead of focusing on being a good daughter, sister, or wife, the focus should have been on being a good, complete, balanced human being. But since I only learned to exhibit the feminine qualities of a fully balanced individual, I arrived into adulthood as a terribly insecure-anxious female. I didn’t know how to be a complete human being without these gender-specific roles.

Let’s take a look at attachment theory to put this all into perspective:

When an insecure couple has a child, the avoidant husband becomes an absent father and the anxious wife becomes an overly involved mother. Resentment between the couple deepens and most often, the mother turns to her children for emotional intimacy.

The mother turns the child into a surrogate spouse and arrests the child’s emotional development. The child inherits the parents’ insecure patterns and also becomes an insecure-avoidant adult. This is the essence of Men’s Mother Complex – Rape of the Heart. Over the course of his lifetime, the child struggles with emotional boundaries, intimacy, self-esteem, anger, rage, and even depression. This is a broken system on the family level.

The insecure-avoidant male then attracts and marries an insecure-anxious female, and the cycle repeats again. This couple will also have an emotionally turbulent marriage and raise insecure children who fare no better than their own parents. This is a broken system on the community level.

My healing and awakening.

My search for self-knowledge started over a decade ago. I wanted to know why I felt the way I did and why I made the choices I did. My family and friends told me I think too much. Some even told me I feel too much. But I kept wondering why am I like this and not like that?

I wanted to know who I really was. Something inside me knew that if I dig deep enough, underneath all the layers of my personality, I would find God. And I did.

I was searching for a mirror, something that rings true on every level of my being. Something that I could point to and say this, this is what I hold to be true deep within my heart.

Last year, I traveled to the Alps of Northern Italy, near the ancient city of Turin, beneath a modest house built on a hillside, 100 feet down and hidden from public view, to an underground palace called the Temples of Humankind.

We were ushered in through an entrance that looked like a mineshaft, which led us to a winding maze carved inside the mountain. As soon as I stepped through the gate into the first temple, my mind and heart saw the most beautiful visual depiction of the Universal Command, Universal Intellect, and Universal Soul I had ever encountered. 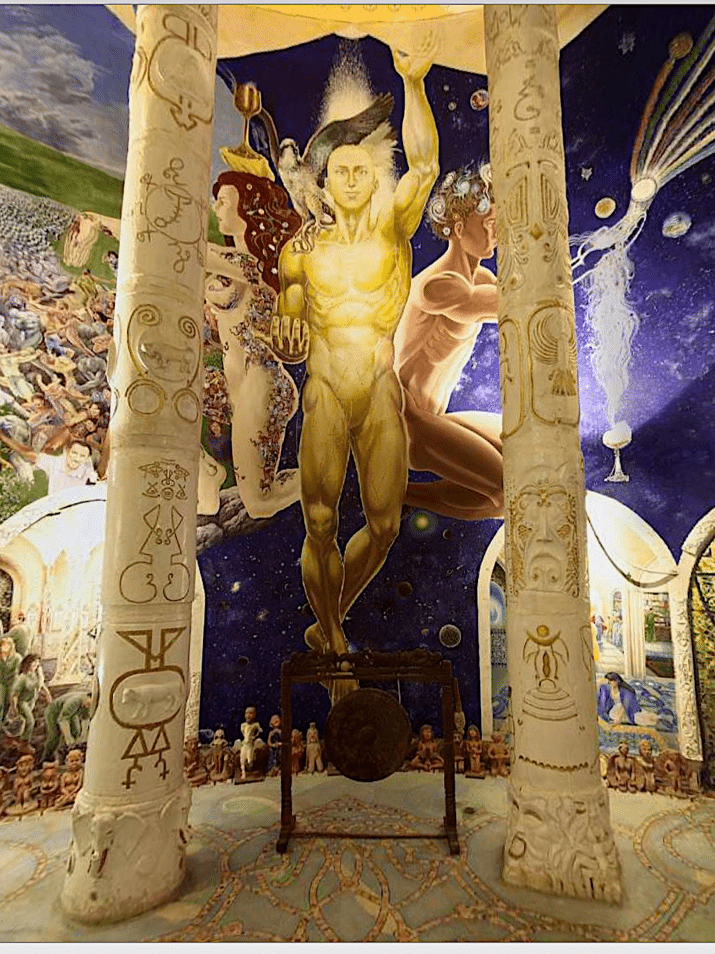 Tears of joy and a sheer sense of profound humility overtook me as I listened to our tour guide explain that this is the story of creation that they teach their children. The figure in the middle is neither male nor female – it’s androgynous. The figure on the right is male and the one on the left is female. The recognition from my eyes to my soul was confirmation that I had found what I was looking for.

I knew this is what I had been missing as a child. These are my parents. This is where I come from. This depicts the potential that exists inside of me, waiting to be activated and actualized. Recognition of this truth continually nudges me from the land of insecure-anxiousness towards greater security. I have both the masculine and feminine energy dancing inside of me. This strikingly beautiful representation of the Universal Command, Universal Intellect, and Universal Soul was also a mirror reflection of the attachment theory I had been studying.

As I gazed up wondering how these colossal images were painted by hand inside this mountain, I suddenly remembered Sri Yukteswar’s words from Yogananda’s Autobiography of a Yogi: “The personal responsibility of every human being is to restore his ‘parents’ or dual nature to a unified harmony or Eden.”

The truth is that all men and women are children of the Universal Intellect and Universal Soul, and thus the masculine and feminine energies exist in every individual. Each individual is perfect and imperfect at the same time.

That evening, I went to bed with only one thought: if a group of non-architects can build these colossal temples inside a mountain, then there must be so much more that humans can accomplish by working together.

I realized I have been dreaming too small and that I must first build the courage to dream bigger, to think of the impossible, to fiercely believe in myself, and to commit to something greater in life. Now, I can choose to follow the limited patterns I inherited from my own physical life or the universal patterns that exist in all things.

These issues cannot be solved with behavioral therapy alone. The act of seeing a therapist behind closed doors tells our subconscious minds that we need to hide our issues from everyone else. This further compounds the shame and guilt we already feel from having the issues in the first place.

It’s time to seek out other solutions.

What if we opted for collective healing by establishing a conscious community that was open to discussing the issues faced by so many of us? Wouldn’t that help us realize that we are not alone in this struggle against our core wounds of attachment and that there is nothing to be ashamed of? Wouldn’t it also benefit the entire community to have a holistic view of our current issues as we move forward together towards a better future?

The greatest push towards our collective healing will come through well-educated women. Generally speaking, a woman’s heart is already open due to the cultural conditioning she undergoes as a child. A great education opens her mind towards self-inquiry and prompts her to outgrow old cultural patterns that no longer serve humanity. Her education links her mind and heart, which ultimately raises the level of consciousness for her individually, in her relationships, and within the community.

Perhaps this is why Imam Sultan Mohammad Shah stressed the importance of educating young women. You see, it wasn’t just for the sake of equality. It was to birth a new consciousness for the coming times.